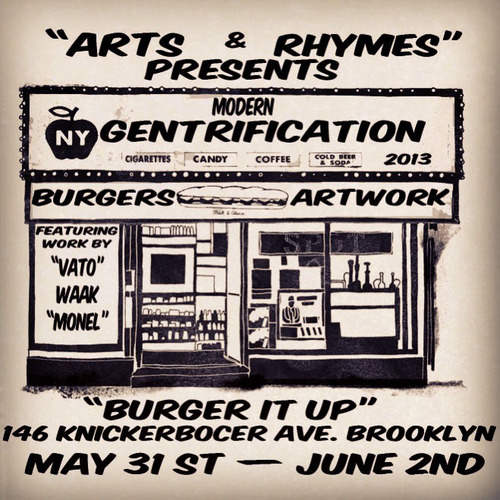 If you’re in the nyc area this weekend be sure to check out BOS (Bushwick Open Studios) for 600+ art shows including this one at Burger it up.

““MODERN GENTRIFICATION”​ features the work of VATO, WAAK STF and MONEL, Three artist’s all from the developing neighborhood of Bushwick. “Modern Gentrification” tackles the controversial issues that come with the gentrification of working class neighborhoods and how it affects its residents. The artist’s will tackle the issue in their own respective style. “Modern Gentrification” will take place at Burger it up Located at 146 Knicerbocker Ave. Brooklyn, Ny, 11237. The show opens this Friday May 31 2013 and will run through the end of June.”

A Song for the Weekend

Still ruminating over the new Aceyalone album that dropped this week. In the meantime here’s a more more sentimental joint from Z-trip featuring Aceyalone and Mystic (who disappeared after one album and I have no idea why.) As they say…”Everything Changes.”

Blast from the Past

I remember when I participated in the “Tap Dance” offered by Hamilton’s DC not to be confused with The Hamilton.

Government as VCs is Bad M’kay

The government is not a business and it shouldn’t be run like one.
Say this about 1000 times until you understand it.

This morning I read Scott Woolley’s post on Slate Tesla Is Worse Than Solyndra that laments the US gov investment didn’t look the like the investments of the venture capitalists and that the US gov should now own a stake in Tesla as a result. While on a very superficial level I could see why one would think so, but if you dig deeper it is a horrible idea for the gov to play VC.

VCs use their connections and influence in an attempt to ensure the success of their investments. Imagine the world of conflicts of interest that would arise were the gov to do the same? Oh we want to give Tesla a chance let’s raise gasoline taxes and offer tax credits for buying an electric car. Let’s make all new fed vehicle purchases Teslas. Let’s legislate a ban on non-electric cars… You see where I’m going with this the gov acting as a VC is rife with problems.

The way the gov approached Tesla is the same way the gov approaches its investment in college education, they back loans that wouldn’t be granted by conventional institutions with knowledge that many will fail and some will succeed, but the overall goal is to have a more educated population. What they did with Tesla and Solyndra is the same, they backed loans on favorable terms in order to achieve a goal that makes the country better as a whole. Having a cutting edge electric car company is good for the US just as having an educated population is good for the US. You’d never suggest that the gov claim an ownership stake in students with the expectation of a cut of future earnings, so why should it be the same for Tesla. The US gov will receive its payback when Tesla creates jobs and pays taxes. If there were any terms the gov should have stipulated it should have been to ensure that Tesla stay in the US for 20 years and isn’t allowed offshore tax shelters or outsourced labor.

Where your job is your credit. Fellow C-List DC Blogger DCKatastrophe gifted me my very own car this weekend, she got a bunch of Eastern Motors schwag after mentioning them in her blog. I wonder if this is subliminally related to a not forgotten promise that if I’m ever in the the position where I can easily piss away $30k I’m going to buy her a pink Miata with the vanity plates “SNDYVAG”
Thanks!

When things get stagnant you gotta stir them up. Enter the freshness that is Chance the Rapper. I admittedly hadn’t heard of this Chicago emcee before but when I stumbled across this project and saw it was backed by Twista, Childish Gambino, Action Bronson, and Ab-Soul with some production by Jake One and Dj Ozone among others, I figured he had to be solid. Acid Rap is solid, different, and great, a definite download and something that’ll get heavy rotation all summer.

God is Not Part of the Great American Past Time

Over the last few years I’ve regained my youthful interest in baseball, this was probably the result of a few seasons of my hometown team, the Brewers, doing well and that I live a long walk, short bike ride from Nationals Park. I’m not sure when this trend went mainstream, as a kid who spent most of his time growing around orthodox Jews my only memory of God and baseball is that Orel Hershiser wrote a book, Out of the Blue

, that I read despite the Christian theme and the potential ostracism of my schoolmates.

Though now going to games has become at bit grating as God has taken a more prominent place in the game, a few examples of note. At both Camden Yards and Nationals Park on Sundays during the 7th inning stretch they play “God Bless America” because I don’t believe in God I show my annoyance with the song selection by sitting, which apparently comes with the risk of ejection. The second annoyance is the once a game playing of God Bless the USA by Lee Greenwood because on the top of the vapid patriotism it is the worst form of music, country. The last annoyance though came from a video game series I’ve enjoyed, and purchased, over the last five years and it is one of the few reasons to consider a Playstation 3, MLB 13 The Show

. In the Road to the Show Mode you can customize every detail about your player, name, preferred number, batting gloves, location of facial features, even if they were born in the US.* One thing I discovered though is that you cannot choose if your player is a believer. This is evident by the gesture my player “The Gentleman Tony Plush” made after a recent win.

*I’m not sure why birth origin is something you can select, I haven’t seen a part of the game where you deal with immigration or foreign tax issues.