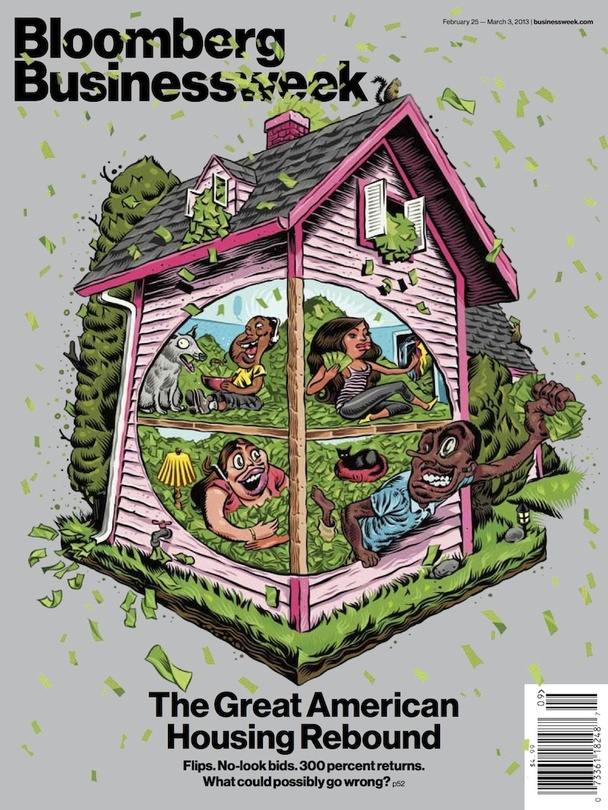 I don’t like to play the race card at the drop of a hat because then its effectiveness becomes diluted when it really is needed (sort of a lá the boy that cried wolf). But I also appreciate it when racism is so blatant that I don’t have to dig through subtle dialogue and theories to flush it out, saves me brain power and extra work. So I have to thank Bloomberg Businessweek for making this an easy one.

Emily Badger at The Atlantic Cities (yea, we’re jocking them today) writes “we still can’t decide what’s most offensive about it: the caricature of the busty, sassy Latina, the barefooted black man waving cash out his window, that woman in the upstairs left-hand corner who looks about as dim-witted as her dog?” There’s absolutely no problem with having illustrated “minorities” on the cover, the presence of blacks and latinos doesn’t automatically make it racial,  but it’s the way in wich they’re caricatured and depicted. And worse yet, apparently the article inside has nothing to do with race, the “piece makes no mention of the racial dynamics of the housing market, or the role of predatory lending.”

Read the rest of Emily Badger’s great write up, here.

There Goes My Hero

The Atlantic Cities has a wonderful post about a guy in a wrestler’s mask who protects pedestrians. 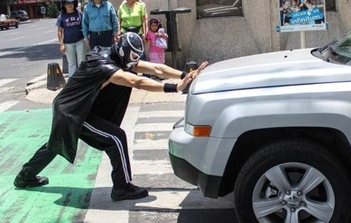 This should be a career job in every city.

Why Shouldn’t this Be Allowed?

I’m an adult. I live within walking distance of the location of the awesome vending machine that sold malt liquor. Unfortunately I didn’t get to use it and because people worry about “the kids” it is gone.

When I get fuck you money I’m going to buy a vending machine for my house and fill it with malt liquor.

Addendum to an Addendum: Filipino vs. Tagalog (I was wrong)

Common Folk have no quandary about calling someone out when they or something they’ve said is suspect. Nor do they shy away from owning up when they’ve made a mistake.

To this end I have to thank DCDan calling me out on trying to call out Google for using Filipino instead of Tagalog as the language of the Philippines. In my experience, I’ve only heard Tagalog used as the name and only seen sideways glares when Filipino was used in its place. But also, no excuse for ignorance. Alas, Tagalog is a language of the Philippines and one that traditionally doesn’t include words from Spanish and English but the official languages are Filipino and English. Filipino, while mostly based on Tagalog, acknowledges other languages and dialects of the country and incorporates them into the language. Tagaloglang.com describes it as more like “Tagalog plus.” Tagaloglang.com actually has a great post about the difference that is much more concise and informative than this round-eye could ever give. 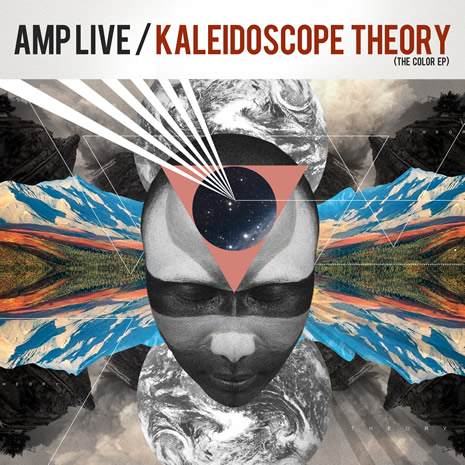 Amp Live, also a member of Zion I, has always been a forward thinking producer pushing the envelope of Hip Hop/Electronic music. He’s a precursor to the whole Flying Lotus phenomena and I’m always hyped to hear what he puts out next (even if there’s a few lemons here and there). This is a free Ep put out by Plug Research (who despite having some great artists has absolute horrid customer service) in anticipation of a full length this fall.

And if you haven’t already, definitely be sure to check out Amp Live’s “RainyDayz Remixes” album featuring Too $hort, Del, and Chali2na, that is a near perfect remix of Radiohead’s “In Rainbows.”

*DcDan called me out on this post and my being wrong about Filipino vs. Tagalog (Filipino is the official language). I’ve amended this with a post here, but decided to leave this post in case there was interest in the Homegrown Hiphop album. -thos

There’s an album that I didn’t include in the normal Tuesday Forecast simply because it’s just not really up my alley, it’s an album called Homegrown Hiphop, presumably a compilation of rappers from the Philippines. I was curious enough to listen cuz I always have an interest in non-American hip hop and googled one of the song titles to find its translation and this is what I got-

Alright, I understand maybe not everyone in the world knows that the language of the Philippines isn’t called ‘Filipino’ but this is Google!!! C’mon, step your game up, you are an international giant. By the way Google, it’s called Tagalog. You get that one for free but next time I’m taxing your ass.