I use Google to search often and since the advent of tabbed browsing I usually open the first ten results in background tabs. I can’t imagine I’m the only person who searches this way. 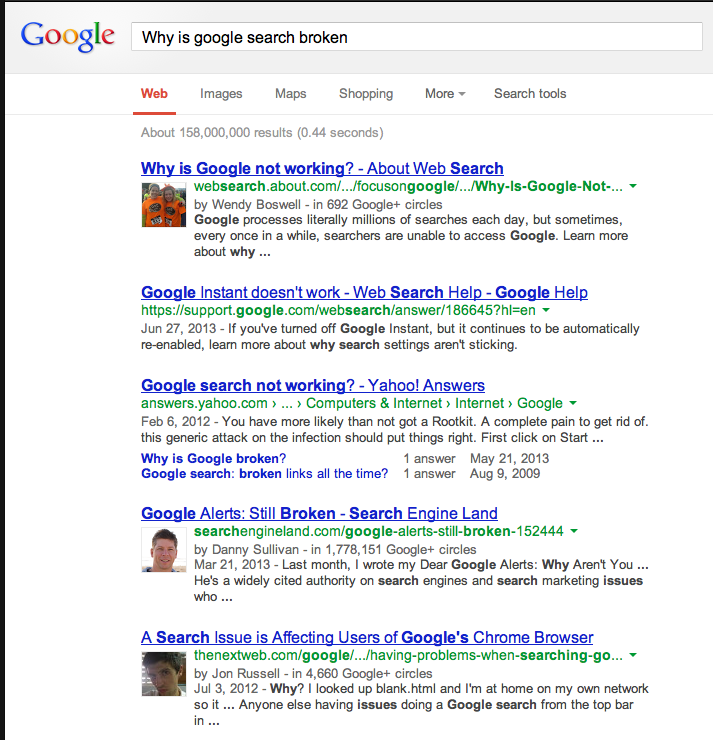 Often times when working through my problem I realize that I’d like to return to one of the tabs that I dismissed earlier. I would do so by finding it in my history by looking for the page title. Unfortunately Google has broken the page title in your history and now I just see a bunch of redirects.

Fortunately Bing doesn’t exhibit this strange behavior and may soon be my search engine of choice.

Bing gets it right.

Update: My former co-worker pointed out that the Safari plugin Detox will restore things to normal.

Check Your Google Glass at the Door

I’m a gadget nerd, I’m fascinated by them and have spent way too much of my disposable income on them. So it pains me to say that I’ll probably never buy into Google Glass and this is why. Google Glass essentially puts an all hearing, all seeing recording device into your house that is connected to the internet. While this is scary in its own right, find the security flaw and a hacker in Russia is now in your house. It also makes it very easy for The Man to skirt around the 4th Amendment and if you think they won’t it’s already a priority.

*DcDan called me out on this post and my being wrong about Filipino vs. Tagalog (Filipino is the official language). I’ve amended this with a post here, but decided to leave this post in case there was interest in the Homegrown Hiphop album. -thos

There’s an album that I didn’t include in the normal Tuesday Forecast simply because it’s just not really up my alley, it’s an album called Homegrown Hiphop, presumably a compilation of rappers from the Philippines. I was curious enough to listen cuz I always have an interest in non-American hip hop and googled one of the song titles to find its translation and this is what I got-

Alright, I understand maybe not everyone in the world knows that the language of the Philippines isn’t called ‘Filipino’ but this is Google!!! C’mon, step your game up, you are an international giant. By the way Google, it’s called Tagalog. You get that one for free but next time I’m taxing your ass.

I’m writing you to apply to be your new Director of Marketing. I know you may currently have a Director of Marketing but over the last several years you have released far too many products with names that are not SEO friendly. I’ll give you Office, Word, Paint, Access, Outlook and Project because those existed before the need for good SEO. The trend started with the release of C# and .NET (a top level domain mind you) continued with Bing and the most recent Surface. I promise that when I take over marketing operations SEO and non-generic product naming will occur before any product naming decisions are made.

As an example you may search with Bing, Yahoo! and Google for DC Dan and note that I’m the first result for each.

Thank you for your time and consideration.

I read about a bug involving iOS 6 and Microsoft Exchange servers. My thought was “People still use Exchange?” In the world of hosted Google mail at $50 a year a person I’m still amazed at the amount of resources people are willing to throw at email and calendars.