Yes, there is a lot of stuff. A lot of dope shit. But I can’t hold your hand through this, you’ve gotta sift through and find that gold for yourself. Hey, at least I gave you a road map
STSxRJD2 Lyrics Born Prefuse 73 Damu the Fudgemunk Gaslamp Killer Camp Lo Murs Hiatus Kaiyote Faith No More Roisin Murphy Andreya Triana Blanck Mass Django Django Knxwledge Hot Chip Tanlines Shamir 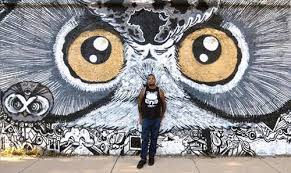 We are celebrating the life of our friend and artist, Jason Brooks aka Brooks Golden with a display of his artwork and your photographs and tribute art as well. This Sunday, May 4th, 2014 5pm to 10pm at the Chicago Urban Art Society, 600 W Cermak Rd, Unit 1B, Chicago, IL

If you would like to lend an artwork or drawing of his for the evening’s display, as well as tribute art or photos, please contact Oscar Arriola at fotoflow@…gmail.com. We are also asking for jpgs of any artwork photos or personal photos that you would like to share for projecting on the wall.

We will play his favorite music, which ranged from metal, soul, hip-hop, Morrissey, reggae, and more. Any song suggestions would be appreciated. There will be a mic available beginning at 6:30pm. for sharing stories and tributes.

As a fundraiser, Grime Time Magazine will be re-issuing the shirt design that Brooks designed featuring his drawing of a bat. T-shirts, tanks, and hoodies will be available.

Funeral services will be held the following day in his hometown of Milwaukee from noon to 1pm, Monday, May 5th at Leon L. Williamson Funeral Home, 2157 N 12th St, Milwaukee, Wisconsin. There will be a reception after the services at a local hall. Address for the Milwuakee reception to be announced soon.

This is a photo I shot of a piece Brooks had just finished at an abandoned building in downtown Chicago two years ago in 2012.

I learned the heartbreaking news today. Jason was an incredible artist and fantastic human. More later.