First off, P.O.S. He is a definite. Hard for him to do wrong by me.

Some other releases on here though, I’m just not feeling but everybody and their grandma is. Kendrick Lamar. Someone needs to explain to me why he’s so amazing and why everybody’s dick riding him. I’m also lost on Georgia Anne Muldrow who’s boring production just seems to be on repeat. But she’s doing an album with Dj Romes from Lootpack (Blackhouse). Then there’s Vinnie Paz (Jedi Mind Tricks). I’m just not feeling him but he’s been in the game for years and earned respect so there you have it.

Here’s some possible gems, in the very least some releases I’m curious enough to give a listen to. 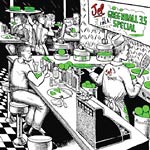